Montreux, Switzerland: For decades, the rich, famous and powerful have come to the Swiss town of Clarens, on Lake Geneva, in search of the elixir of youth.

Charlie Chaplin, Marlene Dietrich, King Ibnsaud of Saudia Arabia, Charles de Gaulle and even one Pope (Pope Pius Xll) are just a few of the world elite who have sampled rejuvenation from a serum created exclusively at the world-famous Clinique La Prairie.

Recently I followed in their footsteps to sample what CLP has to offer to todays discerning client. In an era of advancing medical discoveries such as stem cells and the manipulation of DNA which make reversing ageing a real possibility, does Clinque La Prairie still live up to its reputation as a worlds leading medical spa?

My anti-ageing journey, began at Geneva Airport where I am met by one of the Clinques chauffeurs, holding a CLP board with my name on it. I am driven at high-speed along the motorway that skirts the edge of Lake Geneva in a black Mercedes. I pass the time during the 45-minute journey by trying to prise out any secrets of the celebrity patients from my Italian chauffeur, but he is no more revelatory than a Swiss Bank on client financial disclosure to Interpol.

CLP recently underwent a $40million renovation  the original building, the Alpine-style Residence, built in 1928; the Château, build in 1865 as a girls school and the Medical Centre  are now all linked to a new spa centre and reception. 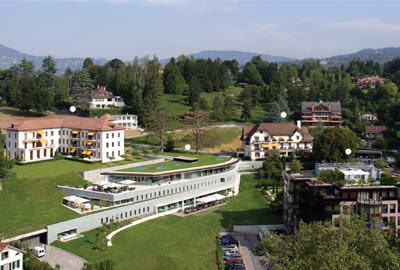 Architecturally stunning  CPL’s Swiss owner, Armin Mattli, had the new complex designed by Jacques Richter and Ignacio Dahl Rocha  creators of the stunning Néstle HQ building in nearby Vevey  it is built into a hillside so it melts into hillside. Each floor of the building having access to the outside.

I am checked into the original building, Residence, which reminds me of an Austrian skiing chalet from the outside. But the bathroom is marble, the sheets are of the finest linen and the press of a button changes the position of my bed.

The view from my balcony is spectacular. I look across classical Italianate ornamental gardens enveloped between the high mountains that surround this part of Lake Geneva. The view from the indoor pool also looks directly onto the mountains.

CLP first opened in 1931 offering patients its signature treatment, Revitalisation Therapy, an anti-ageing cocktail made of fresh animal cells. This cellular revitalisation therapy has since been refined and is now made only of fresh liver cells from fetal sheep.

These days CPL attracts a mostly European, Russian and Chinese clientele. During my two-day visit, most of the other guests were either Russians or Arabs taking those famous sheep extract shots, alongside cosmetic surgery and weight-loss packages.

The Clinique has a state-of-the art medical centre (pictured below) equipped to carry out the most sophisticated medical diagnostics including MRI, CT and ultrasound scans. The operating theatres carry out all kinds of procedures , including cosmetic surgery. As well as non-surgical aesthetics, it also specialises in the latest surgical hair replacement procedures.

There are 59 rooms, which can accommodate up to 100 guests and 200 staff, most of whom speak three languages. There are also some 60 consulting doctors, whose specialities range from cardiology and neurology to dermatology and cosmetic surgery.

Every patient at La Prairie undergoes a two day complete medical examination to check on current disorders and to pin point any risk factors such as cardiovascular disease, metabolic or cancerous problems and osteoporosis. It also includes detailed blood tests, genetic testing, an electrocardiogram, as well as a full dental examination.

Chief Physician, Thierry Wälli explains: ’We do routine tests such as for cholesterol and diabetes but our approach to every patient is individualised. It would be inconceivable for us to prescribe or administer care without understaking a thorough preliminary basic checkup.

“The majority of patients come to us in their mid-40s or 50s and they are probably thinking that they would like to stay as healthy as they are now or they are starting to feel the first symptoms of ageing: maybe they dont recover from illnesses as quickly, or they feel tired all the time or they may just have a feeling that something is starting to go wrong.”

And as you would expect staying at CLP does not come cheap. Revitalisation Therapy costs up to $25,000, £12,500, 26,000CH per person. But this does not bother the super-rich – I am told an Arab princess stayed here for a year to loose weight.

Dieting at La Prairie is virtually painless. Every patient gets a bespoke programme, with lunch and dinner served in an elegant restaurant. I meet with the dietician, Cynthia Oulevay, as part of my Journalists Programme.

She puts me on the Menu Minimal, some 1,200 calories. You would hardly think this was enough for any kind of gastronomic experience. But you would be wrong. Lunch and dinner are based on a form of light Cuisine Minceur. There is a menu with several choices and I pick three courses, which would not be out of place in a Michelin Star restaurant: Cream of San Marzano tomato soup with mint, Canadian Lobster with a light Bisque sauce with tomato, truffles and artichoke, Gold Kiwi Flan with yogurt, flavoured with vanilla.

Days are structured, with lunch and dinner served at specific times and if you are late you get a phone call reminder. You need an appointment to go to the gym. There is a bar but few guests imbibe and in any case it closes by 9pm, by which time most of the guests have gone to bed  as two Middle Eastern gentlemen discovered when they wanted a drink. I saw them later that evening sitting outside the brasserie of the Montreux Palace with large whiskies in hand.

Each morning begins with breakfast in your room at 8am. Mine is scrambled eggs and wholemeal bread, with tea. I can hardly believe its within the calorie count I am allowed!

Then I wander down to the Spa for my programme, in my robe. In the corridor I pass by cabinets of sparkling jewels and stop to look at the diamond studded dominos. There are gold and diamond watches and other fine jewels from the Haute Hologeries in Geneva. I am told at reception that they will come to the Clinique with a selection if there is something I require

The spa is minimalist except for a four foot high brass Buddha. I have a body peel and chromotherm  an individual Turkish bath which bathes the body in seaweed, essential oils and mineral mud

I am also treated to a very special Ayurvedic massage from Alain, a pony-tailed yoga teacher, who has 38-years experience as a practitioner. He tells me he is a vegetarian so has not tried the sheep liver cocktail.

In the gym I get a check-up from François Victor, the Health Club Manager, who measures my BMI and other biomarkers. The bad news: he tells me that I only need 1,200 calories a day to stay the same weight and the good news: if I exercise I will build good muscle tone. 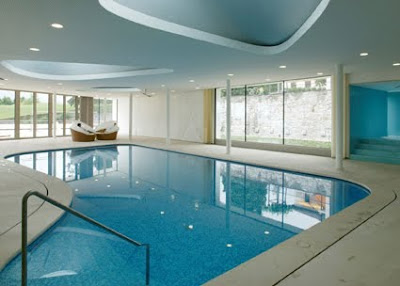 And so I retire to the pool where the heat makes me soporific .. I wonder where the other guests are as I am the only person there. I gaze out at the mountains and dream of treating myself later that evening to a glass of champagne!

The next morning its time for me to go. I depart feeling pampered and rested. True Clinique La Prairie offers rejuvenation at a vey high price but a price paying for your health wealth …

CLP is best known for RT; injections of an extract from fetal sheep liver cells. The treatment dates from 1931, when the Cliniques founder Professor Paul Niehans, injected calf parathyroid glands into a woman who was suffering from tetany (muscle spasms associated with deficient parathyroid secretions). She recovered and lived another 31 years and Niehans concluded that animal cells might alleviate other conditions.

In 1953 the Vatican summoned him to treat an ailing Pope Pius Xll. His success put the Clinique on the map and brought in the big name patients.

For the first 50 years, the extract was a cocktail of organs, but in 1987, the clinic began research to lend scientific credence to its claims. Its tests determined that liver cells were the most effective component, and in 1988, they became the basis for the CLP extract. The cells are taken from unborn sheep that are bred on the clinics own farm, and the extract is produced refined, and purified at its lab, under the supervision of the
Swiss public health authorities. It used to be given as a series of 14 injections, which meant most patients had to recover in bed. Today it is given as a drink and there are plans to turn it into a pill.

Studies carried out at CLPs Research Institute support these claims and have been published in medical journals such as Immunlogy and Experimental Cell Research.

The revitalisation treatments are meant to slow and reverse ageing, reverse mental decline and the symptoms of the menopause and andropause, which is why they are only given to people in middle age or older not to anyone aged under 40.

Side effects are rare, and after being monitored for two hours in case of allergic reactions or anaphylactic shock patients are free to use the other services. Patients are encouraged to repeat the treatments every 18 months to two years and maintain the effects by eating well, exercising, not smoking, drinking moderately and managing stress.

I did not take the extract myself so I cannot say how it feels. In theory, at its most basic, the benefit of CLP-Extract, is that it kick starts the cells, giving them albeit temporarily, the characteristics of younger cells and boosting the immune system. So if I could afford it would I be revitalised  the answer is yes why not?

A picture show of Montreux, Switzerland