Iconic Mayfair member’s club, Tramp is celebrating its 50th year with a series of high-profile events, that focus on its legacy at the epicentre of cultural revolutions and the galaxy of stars who helped turn the legendary basement of bacchanalia into a nightlife institution, since it first opened its 40 Jermyn Street doors in the last fortnight of the Sixties.

A few of the stars who partied at Tramp

The motto “what happens in Tramp, stays in Tramp” is still true to this day, but if the grand walls of arguably London’s most exclusive and legendary club could talk about the past five decades, they would tell a dazzling story about a decadent home-from-home for the rock ’n’ roll elite, that defined and defines generations, connecting legends who would never have met. And Elixir’s motto is partying keeps you young…

Some of these moments have fondly been shared ahead of its 50th anniversary, as the roll call of eminent names look back: Keith Moon was thrown out for swinging from a 17th Century chandelier and tearing it from the ceiling. Frank Sinatra would sit at a table by the ladies’ bathroom, so that members would notice him as they descended the staircase. A cleaner was shocked one morning to discover Mamma Cass, who habitually fell asleep on one of the banquettes and was locked in, following a big night. Marlon Brando was another who couldn’t bring himself to leave, opting for a plate of pasta for breakfast with the staff, in true Godfather style.

It has welcomed a range of Princes from The Artist Formerly Known As…, to Prince Naseem and Princes William, Harry and Andrew. Princess Margaret would charge to its dancefloor with Lord Snowdon and Peter Sellers. And Dodi Fayed would party with Princess Diana, whose friend Freddie Mercury often clambered onto the DJ stand to direct the dancing glitterati.

It is such a superstar mecca, that three Bonds – Sir Roger Moore, Sir Sean Connery and George Lazenby – bumped into each other and ended up having dinner together in the club’s Zodiac restaurant. Indeed, Roger Moore and Tony Curtis were once found on their hands and knees in the club, fixing a flood, to the tune of Singin’ in the Rain. Sir Michael Caine even met his wife at Tramp, saving himself the trouble of a planned trip to Brazil to seek out the actress he had fallen in love with, after seeing her in a coffee advert. It was this romantic and glamorous reputation which inspired Jackie Collins’ bestselling book, The Stud, based on Tramp, and turned into the hit movie of the same name starring her sister.

Two, limited edition champagnes have been created to celebrate the 50th – a Blanc de Blanc and a Rose – were created in partnership with Eminent Wines The Blanc de Blanc uses grapes from the Montagne de Reims region and has notes of peach, brioche, vanilla and gingerbread.

It is a beautifully fresh, delicate wine, perfect for pairing with white meat or fish. It’s priced at £70 when buying through the Tramp website or to take home and £110 in the club. The Rosé – costing £80 for home and online orders or £120 to enjoy in the club – combines grapes from Chardonnay, Pinot Noir and Pinot Meunier and offers delicious, raspberry and pink biscuit flavours with hints of vanilla and floral touches. It is a complex, structured and elegant champagne that will perfectly accompany white meat, fish or desserts.

In addition, a Tramp Brut Cuvee will also be available for purchase at £55 at retail price and £95 in the club. All champagnes are available to preorder from the club’s website before their 19 July launch.

Tramp manager, David Fleming says: “Over the years, Tramp has served thousands of bottles of champagne to its glamorous clientele including rock stars, Hollywood royalty and actual royalty and our 50th anniversary seemed like the perfect time to offer that same experience to members of the public.

“We’re excited about giving people the chance to taste a little bit of this magical club when they drink Tramp champagne.” 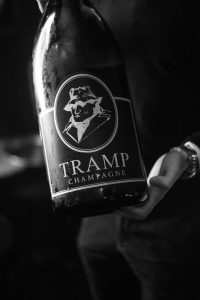 The club has also launched an opulent, 24k gold burger. When Tramp launched in December 1969, the owners took their lead from the grand, hand-carved ceiling – formerly part of a Freemasons Lodge – that depicted the twelve signs of the Zodiac, by offering twelve Zodiac Burgers on their menu in their 17th Century, wood-paneled Zodiac Restaurant. 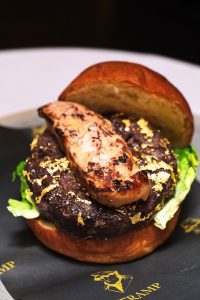 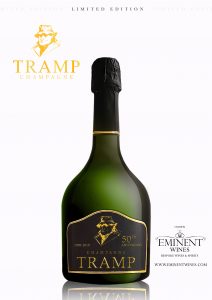 These have now been perfected into a single dish, known as the Tramp burger – and it boasts a secret sauce known only to the club’s head chef, which has been carefully passed down through five decades. Its 50th Anniversary upgrade will see the regular Tramp burger topped with truffle, while the patty will be given an extra special makeover for its Golden Year, with a 24k gold leaf coating. The burger will be added to Tramp’s menu from July 19. Fleming says: “The burger has been a stalwart of Tramp’s menu for 50 years and we are marking our golden year by giving our signature dish a golden makeover.

“A burger and fries with foie gras and 24k gold perfectly sums up Tramp: Glamorous and luxurious on the outside, but still down to earth and fun once you get inside.”