It seems we need to go green!!

The debate over the use and benefits green tea has been lengthy. 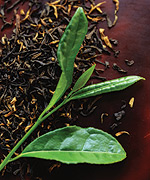 There has always been a view that drinking green tea helps with weight loss.

It came up again a couple of weeks ago as my personal trainer was putting me through my paces as she drank a sizable mug of green tea.

While my PT is training for a bodybuilding show in a few months it seems green tea can help with fat burning I was told.

However there are those that say it is the caffeine in the tea that does the trick not the green tea itself.

Well now we have the answer its seems as academics at Anglia Ruskin University undertook a study with a group of men to see if decaffeinated green tea could do the trick.

They took a group of 14 men with an average age of 21 years old as the test subjects.

Seven of the volunteers, took the green tea capsule, containing 571mg of decaffeinated green tea extract, while the other took a placebo.

It seems the findings showed not only did those who took the green tea extract reduced their body fat by 1.63 per cent, compared with those in the placebo group, but their performance was also enhanced. Interestingly the level of fat oxidation rates, important in weight loss also increased by 25 per cent

All 14 of the test subjects were asked to cycle for one hour three times a week and those on the green tea saw their performance increase.
Those on the tea saw a 10.9 per cent the 28 days of the study which saw the distanced covered per session go from an average of 20.2km to 22.4km.

That’s the good news but the capsules themselves contained a dosage which would mean that those wanting to get the green tea boost would need to consume up to seven cups per day.

The university hopes that there will now be a wider study undertaken in order to provide more tangible proof of the benefits but it is a big step forward for those who believe in the benefits of green tea with or without the caffeine.