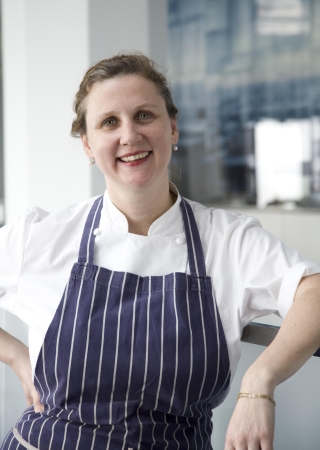 Angela Hartnett – one of the UK’s best-loved chefs

Having begun her career as the protégée of the famously fiery Gordon Ramsay, chef Angela Hartnett has gone onto make a name for herself as one of Britain’s best-loved chefs.

Her trademark style is simple but sophisticated Italian cuisine, a love of which was instilled in her by her Italian grandmother and mother.

The 46-year-old is now Chef Patron and owner of the Michelin-starred Murano in Mayfair; has launched Café Murano in St James; the Merchants Tavern in Shoreditch and revamped the restaurant in the Limewood Hotel, Hampshire, as Hartnett Holder & Co. In 2007 she was awarded an MBE for Services to the Hospitality Industry.

Angela says: “I come from a family that always liked food and food was always part of our lives

“We always ate together as a family and cooked together so it was something I grew up with from both sides – my mum and my dad’s. I was taught to cook by my grandmother and my mother. You were expected to help out in the kitchen and learn what to do.”

Harnett’s Italian heritage has obviously had an influence on her cooking style. “That’s what I grew up learning

“It makes sense that you stick to the things you know best, hence why I do more Italian food than anything else. I cook the type of food that I was brought up on and I know well.”
Simplicity yet sophistication is key to Hartnett’s culinary style, with a big focus on seasonal ingredients.

“You work with what’s in season because that makes sense,” she says. “You’re not suddenly going to put asparagus on in the middle of December. If it’s not in season it will taste rubbish.”

Hartnett isn’t keen on the phrase ‘signature dish’ – “it sounds like you only cook one thing, when really these things evolve” – but she agrees that “great pastas and risottos” are very much the style of her restaurants.

“That’s what we cook in the restaurants – good, simple, tasty food,” she says. “It’s not about making it too complicated.”
As Gordon Ramsey’s former protégée, one might expect that Hartnett had a rough time whilst learning her trade, but she is keen to dispel the image of the hot-headed chef from the TV shows.

“He was great. He was an absolutely top bloke,” she says. “If I hadn’t worked with Gordon I wouldn’t be in the position I’m in now, without a doubt. He taught me about running a kitchen and the importance of consistency. I worked with him for 17 years and you don’t work with someone that long if they are intimidating. You work with someone because you enjoy working with them and because they’re a good person.”

Hartnett will be appearing at the Padstow Christmas Festival this December where she will be holding cookery demonstrations with Luke Holder, the head chef at Hartnett Holder & Co, and Neil Borthwick, head chef of the Merchants Tavern, who also happens to be Hartnett’s partner.

When asked for advice on the best way to prepare Christmas dinner, she says that preparation is key. “Be organised and don’t leave everything to the last minute.

Get your potatoes done earlier, get your veg cooked off, that sort of thing. Keep it simple. Everyone goes overboard at Christmas and tries to do so many accompaniments. I know it is Christmas and a time of celebration but you don’t have to go nuts and suddenly do five types of stuffing and three types of potatoes. Do little and do it well as opposed to doing lots and doing it badly.”

So does she do the majority of the cooking at Christmas time? Or does this busy chef get the chance to put her feet up?
“No I tend to end up doing it,” she says, “as it always seems to be at my house or one of the restaurants, but I have people helping me. Last year we had lots of friends over so the day before we did all the prep together and then on the day you just stick it in the oven and carve it.”

Having appeared on shows such as Hell’s Kitchen and Kitchen Criminals, are we likely to see Hartnett moving into a TV career like her former boss?

“I prefer my work in the kitchen,” she admits. “The TV work is good but at the
end of the day what makes your business is your restaurant, so you need to ensure that that’s running smoothly. I like doing the odd bit of TV work but I don’t want to do it permanently or do loads of it. I’m quite happy just flitting in and out.”