London: An African herb, discovered in the last century, has been shown to cut the severity and length of illness in sufferers of flu and colds.

The herb, marketed by a German company, under the brand name Kaloba, has been tested in medical trials and proven to work. But the manufacturers admit they have yet to discover exactly how.

Kaloba, which comes in both tablet and liquid form, is made from an extract of the Pelargonium root. The medicine is already popular in Germany where it has been on the market for several years to treat illnesses of the upper respiratory tract such as the common cold, runny or blocked noses and coughs.

The makers recommend taking the product as soon as you feel unwell rather than taking it on a continuous basis. It has been approved by the UK’s Medicines and Healthcare Products Regulatory Agency as a herbal medicine.

With long-standing use as a traditional herbal remedy, studies have also shown that Kaloba can help prevent secondary infections such as chronic bronchitis, which develop in around 1 in 20 people. Using Kaloba will not only reduce the severity of symptoms but also get you back to health quicker, say the makers.

Dr Mike Dixon, GP and chairman of the NHS Alliance says: Kaloba holds a licence-based on 30 years of traditional use; however it is reassuring to see that Pelargonium  the ingredient within Kaloba® – also has numerous clinical studies to support its immune boosting, anti- viral and anti-bacterial benefits.

Dr Dick Middleton, Technical Director at German manufacturer Schwabe adds: When the time for taking preventative steps has passed, people want a treatment to help them get back to health as quickly as possible. When a cold strikes, Kaloba® is an effective medicine to relieve symptoms of infections such as the common cold. 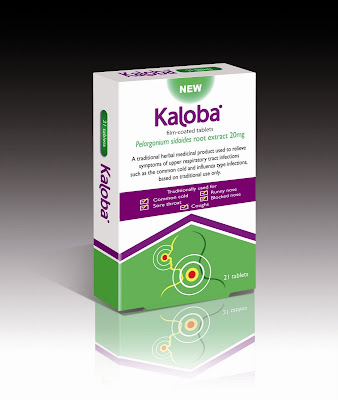 More information about the formula

Kaloba Liquid is available in easy to administer oral drops, which can be added to water or taken directly from a spoon. It is particularly suitable for children six years and over, for relieving the symptoms of coughs and colds that are so prevalent in childhood. Kaloba Liquid is priced at £7.99 for 20ml. Dosage for adults and children over 12 years: 30 drops orally, 3 times a day. Dosage in children six years and over: 20 drops orally, 3 times a day.