The full list of menopausal symptoms is long and frankly, over-whelming, so its good to know that natural remedies can help manage the symptoms.

But new research has shown that the natural healing and balancing power of pollen could be used to help ease the common menopausal symptoms of hot flushes, night sweats, irritability and fatigue.

Vitamins, carotenoids, flavonoids, minerals, amino acids, fatty acids, enzymes phytosterols and prostaglandins all form a part of pollen, making it the perfect building material for our cells. Femal contains two special extracts of standardised pollen combined with vitamin E, formulated to support womens health throughout the life stages from the start of womanhood to maturity. 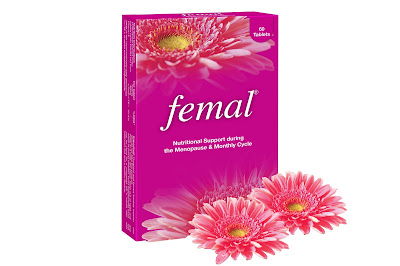 TRY IT FOR FREE! You can experience the benefits of Femal for free – we have 10 packets to giveway. All you have to do is email us at readeroffer@elixirnews.com with your name and address. Please put FEMAL in the email header please. (see terms and conditions below).

London: A new clinical study of post-menopausal women who were put on a course of soya plant supplements for nearly one year has shown that it reduces hot flushes by 61%.

In another study, sponsored by manufacturer Arkopharma, the supplement called Phyto Soya was also shown to be safe and caused no growth of the endometrium – the womb lining. A total of 310 biopsies were taken at the end of a year long study of post-menopausal women and no cases of abnormal growth were detected.

The capsules also helped vaginal dryness which can also be another side effect of the menopause.

Phyto Soya which is sold in the UK in branches of Boots is a range of natural soya isoflavones, formulated for women who do not want to take Hormone Replacement Therapy (HRT), or have had to stop using HRT because of side effects or would like to complement the effects of their prescribed medication.

Over 70% of women are affected by menopausal systems some of which begin during the perimenopause when they are still experiencing menstruation. These symptoms can go on into the 60s and 70s. The hot flush is a classic symptom that affects 80% of women – for one in five it is severe.

Dr Catherine Hood a general practitioner who specialises in women’s health says that the supplement is an excellent alternative for women who do not want to take HRT but that women with a history of breast cancer should seek medical advice on taking the two a day capsules.

She said: “Alongside the clinically proven efficacyof Phyto Soya in reducing the frequency of hot flushes, this study indicates the safety of this supplement for post-menopausal women. The conclusion is that this specific soy extract may be recommended for women who prefer not to take HRT.”

For further information: Read the Menopause Fact File. Also the Phyto Medicines Fact Sheet and also information on the Phyto Soya range of products by Arkopharma

London: Two new studies, each involving 400 menopausal women, who were given a natural soya supplement has shown that it did not cause the potential dangerous side effects sometimes associated with oestrogen such as a thickening of the womb lining or breast cancers.

The studies were carried out by the French pharmaceutical company Arkopharma in relation to its supplement Phyto Soya, which helps relieve menopausal symptoms such as hot flushes by boosting levels of the hormone oestrogen naturally.

Nearly 400 women took part in each of the studies. The first looked at the effects of Phyto Soya on the endometrium – the lining of the womb – in women aged 45 to 65 years old. In this case the 310 biopsies that were available for evaluation at the end of the trial showed no cases of hyperplasia – an abnormal increase in the number of cells or cancer.

Separately, in another international study, which hasn’t yet been published, the women who were taking Phyto Soya were checked for changes in their breasts with mammography and breast ultrasounds. It found no changes at all in any of the subjects, and therefore no risks of breast cancer associated with the supplement. This study also confirmed that it caused no cases of endometriosis.

The studies’ authors are keen to point out that their results only apply to the brand of soya known as Phyto Soya and do not apply to any other soya isoflavone extract.

The good news for women is that a third study showed that trialists taking Phyto Soya experienced significantly fewer hot flushes a day, with two-thirds of them saying their number of hot flushes had been halved and 73% rating it as good or excellent.

The study concludes that menopausal women worried about the long-term effects of taking HRT now have a new, safe alternative in the form of soya extract.

The low incidence of menopausal symptoms in countries like Japan, where people eat a lot of soya, has long caused some experts to claim that soya extracts could do the same job as HRT. However, there was no proof that it was any less risky to take  until now, that is. But these new clinical studies have shown that Phyto Soya not only significantly reduces hot flushes but also is definitely safe when taken over long periods of time.

Soya is one of a number of plants that includes extracts called phytoestrogens, which are chemicals that act like oestrogens in animal cells. Isoflavones, which are found chiefly in soybeans, are specific phytoestrogens that have a chemical structure that is very similar to human oestrogen. This means that they can affect the way that women’s bodies produce oestrogen, if the right types and amounts are used.

Medicinal plants and their preparations belong to the oldest known health-care products that have been used by human beings all over the world. The World Health Organization (WHO) estimates that up to 80% of the population of most developing countries use plant-based medicines. Between 25 and 50% of all modern drugs are derived from plants.

According to IMS research in 1995, the European Market for herbal medicinal products was estimated to be worth US $ 5,600 million. The leading countries are Germany (44 %) and France (28 %), followed by Italy, United Kingdom, Spain, Netherlands, Belgium and others.

People are turning to natural and alternative treatments more and more as they become more health-intelligent and aware about what they put into their bodies. The medical profession in the UK is also becoming more accepting of these kinds of treatment as clinical evidence and patient experience is recognised. Alternative therapies are now available on the NHS in many parts of the country.