Scientists have discovered changes in the human microbiome when compared to those of our closest relatives, the Great Apes.

Scientists who examined the bacteria in chimpanzee and gorilla faeces discovered that they have seasonal changes in the type of intestinal flora brought about by the changes in their diet at different times of the year. Whereas humans are now able to source all kinds of food throughout the year which means that the intestinal flora stays the same.  According to scientists, who now place increasing emphasis  on the importance on the role  of gut bacteria in human health this could implications for our wellbeing. 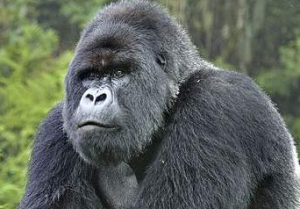 The types and numbers of bacterial species that inhabit the human gut depend on what we eat.  And, as humans have changed their diet over time, the microbiome has followed suit, according to a recent study published in Nature Communications.

The Western diet, in particular, is wholly different to that of our ancestors just 100 years ago — let alone early humans who walked the earth millions of years ago.

The human digestive system, though it does have differences from our closest relatives — the other great apes — is relatively similar. And, when our species first split and went off on our own evolutionary path, our diets probably had a lot in common, too.This means that the bacteria types living in our gut were, at least initially, pretty similar to our hairier cousins. There are still similarities today, but, as our diet has shifted, so has our microbiome.What this huge change in our diet means for our microbiome and related health is a tricky question to answer.

Researchers at the Center for Infection and Immunity at Columbia University’s Mailman School of Public Health in New York City, NY, investigated ape bowel waste. Specifically, they examined fecal samples from great apes living in the Sangha region of the Republic of Congo, collected by the Wildlife Conservation Society.

Their sampling was spread over three years, in order to give them an idea of how gut bacteria populations shifted seasonally.

The authors noted that, in chimpanzees and gorillas, the microbiome changed significantly with the seasons, along with their diet. In the hot, dry summer, for instance, fruits are their primary food source, whereas for the rest of the year, their diet is mostly fibrous leaves and bark.

Brent L. Williams, Ph.D., an assistant professor of epidemiology, explains one of the primary changes they evidenced:  “Bacteria that help gorillas break down fibrous plants,” he says, “are replaced once a year by another group of bacteria that feed on the mucous layer in their gut during the months they are eating fruits.”

Interestingly, the changes mirrored those of the Hadza hunter-gatherer people from Tanzania, who similarly rely on seasonal food availability.

In contrast, as far as the average U.S. citizen’s microbiome is concerned, seasonal changes do not occur. We can access pretty much any food type we want at any point in the year.

The team noted other differences, too. According to first study author Allison L. Hicks, “While our human genomes share a great deal of similarity with those of our closest living relatives, our second genome (the microbiome) has some important distinctions, including reduced diversity and the absence of bacteria and archaea that appear to be important for fibre fermentation.” Do these differences matter to our health?

“The fact that our microbiomes are so different from our nearest living evolutionary relatives says something about how much we’ve changed our diets, consuming more protein and animal fat at the expense of fibre,” says Williams.

As mentioned earlier, during the fibre-poor summer months, the microbiome of the great ape is dominated by a strain that feeds on the gut’s mucous layer.”Many humans may be living in a constant state of fibre deficiency. Such a state may be promoting the growth of bacteria that degrade our protective mucous layer, which may have implications for intestinal inflammation, even colon cancer.”

As Hicks says, “Understanding how these lost microbes influence health and disease will be an important area for future studies.”

London: A new pilot study from The Netherlands suggests that friendly bacteria, which have known benefits for intestinal health, may boost the number of bowel movements and relieve constipation.

The study investigated the potential of a probiotic mixture to alleviate the symptoms associated with childhood constipation, a condition that can affect up to 30 per cent of children in the Western world according to researchers.

Researchers from the Academic Medical Centre in Amsterdam report state that previous studies with single strains showed conflicting results, and that a mixture of Lactobacillus and Bifidobacteria strains may hold the key. “Given their safety profile, probiotics could be an attractive compound to manipulate gastrointestinal motility in constipated children,” wrote lead author Noor Bekkali.

Available from The Nutri Centre, the UKs leading resource for nutritional supplements, complementary medicine and advice, Biocare Bio-Acidophilus contains 8 billion viable cells in an exclusive LAB4 complex, consisting of two strains of Lactobacillus Acidophilus and two strains of Bifidobacterium Bifidum. These strains have been specially selected for their robustness and ability to survive in the human digestive environment. The fructooligosaccharide (FOS) base is a highly effective growth medium for these probiotic bacteria.

Bio-Acidophilus costs £17.95 for 60 veg capsules. Adults should take 2 capsules per day. The dosage for children is lower at half a capsule per day from 12 months onwards, and 1 capsule from 2 years onwards. Children between 6 and 12 months can take half a teaspoon (2g) per day of Biocares strawberry or banana flavoured Acidophilus Powder (60g for £13.75), which contains the same beneficial strains of bacteria in a base of naturally flavoured FOS. Bifidobacterium Infantis (60g for £24.60) is suitable for children from birth onwards, as it only contains the one strain of bacteria, also in a base of FOS. The powder can mixed withwater, milk, juice or unheated food. Follow these dosage guidelines or as professionally directed.

All the products are available from The Nutri Centre. Call 020 7436 5122 to order or to speak to a qualified nutritionist, or order online at www.nutricentre.com